Lewis and Team USA take care of business at “home” 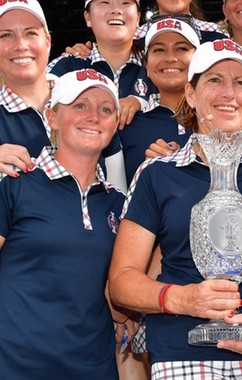 The Solheim Cup will stay in the United States’ possession.

In front of record crowds at Des Moines Golf and Country Club, Team USA secured its 10th Solheim Cup victory on Sunday with a decisive 16 ½ - 11 ½ victory over Team Europe.

Team USA got off to a quick start, taking all four of the fourball matches on Friday evening to secure a three-point advantage over Team Europe before the weekend. From there, Team USA wouldn’t look back. When singles matches commenced on Sunday, the United States had a five-point lead over Europe, needing just three and a half points to retain the Solheim Cup.

For the fourth time, Stacy Lewis represented her country in the prestigious biennial event. She secured 1 point for Team USA, with a record of 1 and 3 throughout the three days of competition.  Lewis and playing partner, Gerina Piller, completed the Team USA sweep of Friday fourball matches, defeating Charley Hull and Georgia Hall 2 & 1. Lewis won four holes during this match, including a birdie on the par-3, 17th to secure the match and help give Team USA the momentum they needed heading into the weekend.

The 2017 Solheim Cup victory is Lewis’ fourth victory as a member of Team USA, including the 2008 Curtis Cup, 2015 Solheim Cup and 2016 International Crown. Team USA will look to retain the cup when the event heads overseas to Perthshire, Scotland in 2019 for the event’s 16th installment.